Former lineal and WBO world heavyweight champion Shannon “The Cannon” Briggs has set his sights on a showdown with former unified cruiserweight world champion and WBA Heavyweight champion David Haye. Briggs was previously dialed in on facing then champion Wladimir Klitschko following him all around the world demanding a shot at the title. At 44 years old Briggs said he was in the best shape of his life at a press conference David Haye was hosting to promote his upcoming fight with unknown fighter Arnold Gjergjaj. After crashing the press conference Briggs continued to tell reporters that David Haye was indeed scared of him. Haye would go on to suggest if Briggs could pass a UK administered brain scan he we consider the idea of facing him. He also suggested that Briggs fight on his undercard and prove to UK fans that a Briggs vs Haye match up is worth going into their pocket books.

Currently ranked number four by the WBA, on paper Briggs is more deserving of a title shot then Haye is. However Haye a UK boxing legend is the A side and has the final say if and when Briggs gets a shot. Briggs has taken his “Lets Go Champ” campaign that has swept the nation to the UK looking for what he described as static. “Lets Go Champ” is a phrase created by Briggs to motivate himself to take it to the next level. Now he uses it as a war cry challenging the best in the fight game seeking a big fight in the twilight of his career. Briggs was also unsuccessful in his pursuit of a fight with WBC titleholder Deontay Wilder with Wilder deciding to face Artur Szpilka instead. Regardless of the venue where they took place, Shannon has won eight fights in a row since challenging Vitali Klitschko for the WBC heavyweight title. He quickly reminded David Haye of his activity shattering the idea that he wasn’t physically able to compete at a Championship level. Briggs recently appeared on an interview with London Live’s Alex Scott where he presented a clean bill of health. Taking Haye at his word Briggs took and passed his UK administered brain scan. Now the ball is in David Haye’s hands.
“They say I’m crazy and they scared of crazy” -Shannon Briggs (Twitter) 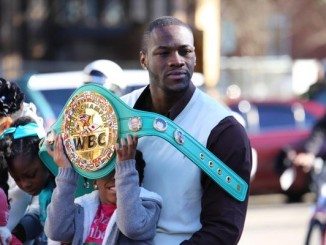