Houston Hip-Hop legend and entrepreneur, Bun B, is partnering with Rock The Bells to headline and curate the first ever Hip-Hop food court experience for the Rock The Bells Festival taking place on August 6 in Queens, NY.

The “Trill Mealz Food Court” will include a selection of rapper-owned food and drink establishments including Bun B, Nas, Trick Daddy, Ghostface Killah Mia X, and more. These eateries will bring a variety of their classic recipes exclusively to the festival, giving fans an intimate experience of Hip-Hop’s expansive and rich history with food. 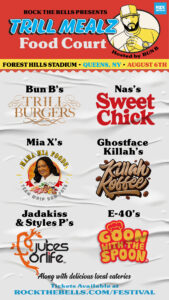 The following restaurants along with food and beverage offerings include the below:

The Trill Mealz Food Court brings fans a fully immersive experience which also includes local Queens-based restaurants and NYC favorites to enjoy LL COOL J’s personal love letter to Hip-Hop through the lens of music and food. This food court helps celebrate the anniversary of Hip-Hop in the city that launched a movement and highlights how these golden-era Hip-Hop artists have transitioned into the culinary world by bridging the gap between food, beverage, and culture. These eateries will share a variety of their classic recipes and explore Hip-Hop’s expansive and rich history with food.

“Food and Hip-Hop are both forms of entertainment and self expression,” said LL COOL J.

“Food has always been a theme within Hip-Hop and are uniquely connected. Hosting the Trill Mealz Food Court at the Rock The Bells Festival at Hip-Hop’s birthplace of New York City, allows us to really connect with the community and create a fully immersive way to experience Hip-Hop.”

“For the first time ever, I will be curating a hip-hop food court at Rock The Bells Festival. Something that has never happened anywhere in the face of the world,” says Bun B. “For me it’s the food now.  I still make music. I still perform, but this is my passion and it still keeps me in the culture”

For every ticket sale, Rock The Bells will donate partial proceeds to the Universal Hip-Hop Museum in the Bronx whose mission is to celebrate and preserve the people, artifacts, and stories that echo from 1973 to the present.

Tickets for the ROCK THE BELLS FESTIVAL are available for purchase here. Tha Native Continues to Soar in 2019